For Black History Month, I would like to shine a spotlight on Dr Shirley Anne Tate, an author, academic, and feminist. Her book Black Skins, Black Masks, (a re-imagination of Frantz Fanon‘s Black Skin, White Masks) focuses on recorded everyday conversations between black women while Black Women’s Bodies and The Nation focuses on the discourse of race and representation.

I came across Tate when talking to my dissertation module lecturer about my project idea. She suggested I look up Tate and her research in race studies. Tate researches black diaspora studies and institutional racism including race performativity, Caribbean decolonial studies, and the intersections of race and gender. She spoke about the issues I was interested in, like black representation and public spaces, and had gone so far as to directly address institutions.

As of July, she is the Canada Research Chair Tier 1 in Feminism and Intersectionality at the University of Alberta, having formerly been the Director of the Centre for Race, Education and Decoloniality at Leeds Beckett University. Tate stands as a role model and inspiration for aspiring you black female academics, particularly in the UK. She has given a TEDx Talk and lectures on tackling the small number of black academics in UK universities, as well as the the black student attainment gap as a result of institutional racism and microaggressions. Tate has also addressed the limited number of black professors at University College London (UCL).

In her TEDx Talk, Tate dispels the myth that unconscious bias causes inequality. She says that

Importantly, she also dispels the myth that BPOC students self-segregate, one that I have heard frequently concerning black cliques in work and school environments, and even as a black woman myself I have been guilty of believing.

“BPOC students do not self-segregate, they are marginalised and that is the status quo in our university classrooms,” Tate said.

Tate is also a successful Honorary Professor at Nelson Mandela University in South Africa and has said she “cling[s] to [her] Jamaican accent with a vengeance” after being complimented on sounding English.

A Black British academic and African-descent Jamaican, Dr Shirley Anne Tate is an inspiration for opening and paving the way for black students in academia. She should be emulated in the manner she encourages an open discourse on race and gender intersections. 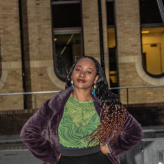