It’s a Friday afternoon, and as I stand in front of a crowd of teenagers, the words echoing in my head, my stomach flips. No one in this room knows me, but the paranoia of people knowing is ever present. The pride is stronger, however. I said it.

I am eleven, naïve as can be, and I hear the word, whispered amongst classmates. It’s not targeted at anyone, but it is said with the same curiosity that would lead us to look at the ‘sex’ section of the encyclopaedia. The word is laden with connotations of scandal, adult, secret.

To this day, the word still makes me uncomfortable. It doesn’t feel like it defines who I am accurately, not in the way gay does. I like the word gay. It’s short, so I don’t trip over the syllables. I can say it in both my languages, let it roll off my tongue.

I like the word. It encompasses so much more, and gives less away about me – it lets people assume whatever they want. It’s political, it’s a statement. But it doesn’t work in French. Yet it describes me better.

If you’ve liked one boy and a hundred girls, what does that make you? Gay, or bi?

I haven’t liked a hundred girls, but I’ve liked many. Every time, it was overpowering – a feeling deep in my gut. There was no mistaking it. With boys, it’s murkier.

I’m sixteen, and I like a boy. I’ve always been fascinated by girls, and mildly interested in boys. This time, it’s deeper. I cry over his rejection. This is before I came out.

After I come out, everyone asks. What about the boy? I shorten the story – I liked his girlfriend, not him; I liked the attention she gave me. But that’s not entirely true.

The truth is, I don’t know. What did I feel for him? I barely ever spoke to him. What defines attraction?

If I’ve liked one boy, and a hundred girls, what does that make me?

See, that’s the problem. Straight people will listen to me say this, and they’ll hear that me liking girls is just a phase. My family will think that I’ll end up with a good French boy someday . Queer people will hear that I’m only experimenting. That I’m betraying them by saying this.

But that’s the thing – my feelings for girls throughout my life are very real. They’ve been all encompassing, punching me in the gut and bathing me in light. I can’t fake that.

The memories of the boy have faded – did I fake it? Did it make it up? Maybe the boy was a phase.

I still don’t know what word I can use for myself. I’ll stick with gay, because that’s what I’ve always used. It’s a shortcut to shape what people think about me, but it doesn’t show the full picture. I’ll continue grimacing when my friends mention sleeping with boys (sorry guys) and I’ll continue being fascinated by girls. But never say never – maybe I’ll like a boy someday. Or maybe I won’t. Either way, it doesn’t matter – it’s what I feel now that does. 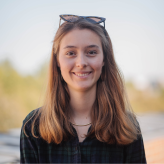