Behold, all lovers of romance; Netflix has come out with the best teenage rom-com of all time. I was immersed in a film that I could finally identify with—a typical teenage story that so happens to also have an Asian-American lead.

Even though our ethnic backgrounds make up core parts of our identity, not every single story in our lives revolves around it – that is what To All The Boys I’ve Loved Before gets right. It has a character with a story that follows none of the Asian stereotypes yet is true to her heritage in subtle ways that have nothing to do with the main plot. Lara Jean Covey is neither a nerd, nor a taekwondo expert. She isn’t a wild party girl who is rebelling against strict parents in order to fit in with the crowd. Her awkwardness doesn’t stem from the fact that she is Asian; but rather from the fact that she’s a teenager who has less than stellar social cues. She owns who she is, despite her anxiety about boys and apprehensiveness of being in a real relationship. Lana Condor brings to life a teenage girl who is so typically found in every single high school and whose adorable awkwardness can be found in teenagers from all walks of life. Of course, it would be wonderful if they could have included more casual Asian-ness into the film, such as requiring shoes to be taken off at the door. Regardless, the film managed to exceed all of my expectations for it.

All excitement about representation aside, To All The Boys is excellently crafted, from Lana Condor’s sincere delivery of cheesy lines to the amazing soundtrack that is weaved seamlessly into the film. The characters and lessons are all relatable—high school rivalries, annoying scheming sisters, and losing favourite scrunchies, all wrapped up in a feel-good story. To put the bow on top, they mention Yakult, the absolute best drink of all time. In a world with so much cynicism, this is the perfect release to lose yourself in for a couple hours.

I haven’t watched Crazy Rich Asians yet and can’t tell how this will hold up to it, but until I do, this is going to be my new go-to feel-good movie. 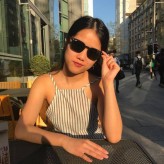